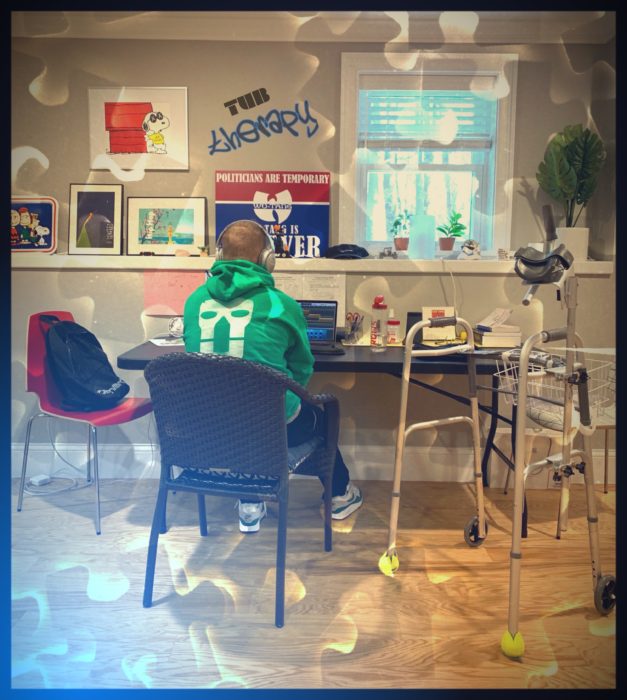 I broke my body and soul skateboarding and decided to make a mix as therapy to deal with it.  That mix transformed into two volumes. The first mix is chilly, for spring mornings in hoodies when the news cycle of racism, police violence and Covid fatigue catches you sideways.  The second mix is for taking the top off the jeep, hitting physical therapy like you never want to use a walker again or you’re training to be the first black Captain America like Sam Wilson.  Also. on that note, Black Lives Matter.  So does having support to get through any tough time so thank you to everyone who helped an old man out during this time. (skips to the music….)

On March 7 I did an old man rookie trick on a skateboard, hitting a rock on a new deck with skinny wheels in a uncleared East Coast winter driveway, and broke my hip and wrist.  The surgery blessed me with a rod in my leg and lengthy recovery that included a stay at a rehabilitation facility and a lot of pain medicine which for an opiate addict in recovery (me) is problematic. The whole situation had me twisted like Keith Sweat. Body. Mind. Emotions. Spirit.

This was the most traumatic experience I’ve had in a long time. Maybe ever. In many ways I’m fortunate to say this although I’m not minimizing the experience by stating it.

I needed therapy. All kinds. Physical I was getting.  And without the support of my family and friends I would have gone into a deep depression and wound up like Thor in Endgame. But in the settings I was in it can be a challenge to get the steady therapy that a soul and heart and mind need consistently.

My old go to’s of exercise or shopping for the latest sneakers either weren’t available or weren’t filling the hole in my soul that big. So I turned to music.

I thought I would spend all those days laid up in the hospital finishing Netflix, maybe catching up to my girl Coco in the 8,972 epsiodes of Naruto. Instead I started making playlists. Mostly of Jazz and Soul and Lo Fi and R & B. I couldn’t listen to hip hop. Not yet. I could not match the energy.   But something felt missing.

Music therapy and music as therapy are two different things really. What I was doing up to that point was using music as therapy which worked great for my thoughts and emotions on a level of revelation. But the evidence based practice of music therapy where the action goes beyond listening and interpretation into expression and transformation is another level.

Then I found Vic Mensa’s I Tape and it clicked. I have an outlet to practice music therapy right here in TUB and although I’d be remiss if I didn’t say that truly clinical music therapy involves a trained clinician working with a person using music, which I did not have, I had enough insight to guide myself through a semblance of the process by making a new playlist for a mix. And the TUB Therapy Mix was born.

I returned home still banged up being cared for by my super hero wife and continued building the track list. It matched the introspective thoughts and weighty emotions I had experienced without being depressing but I worried if it was too heavy.  Then I found the song “Don’t Overthink”, message received, and I pressed on.  I have always focused these mixes new music, and I was finding artists I was really feeling like Kota, Grip and Jayy Grams whose lyrics and sound brought me back to the familiar sounds of underground 90’s hip hop.  Familiar artists were also releasing new music that hit like Marlon Craft and one of my personal new favorite up and coming artists Malz Monday.

Just when I thought the track list was finished and I began arranging the tracks in the order I wanted to mix them I was starting to improve all around. I was home and doing PT and starting the long scary process of getting off the pain meds. The weather outside was warming. And a few of the songs on the lengthy playlist I realized were actually an entirely separate TUB Therapy Mix in the making. The original more introspective mix and the second more expressive mix.  What I had was a double album in the spirit of Life After Death or All Eyez on Me.   So I said F it I’m doing two mixes.

Back in 1997 I made my first mix tape with my boy Jae Cea. It was simply called Hip Hop but the cover was a take on the Arizona Green Tea bottle and each side of the tape was modeled after two of the beverages main ingredients, honey and ginseng. These mixes would follow that lead but use the seasons as their ingredients, winter and spring.

Another topic that was prominent in the song selections is one that is and has been close to my heart, which is that of racial inequality.   As I write this today it hits home as even more salient as the verdict of guilty has been issued in the murder of George Floyd.  I can’t call that justic, it has been described by many as a “make up call” and I feel that.  So while I was relieved there was some accountability held in George’s case and hope the verdict brings more change the same day and days that followed saw more killings.  There are still black men and women who have been killed and are being killed without that accountability. I can’t even list the names they go on and on.  Further acts of racism and the denial of them continue towards the black and African American community and many others.  The American obsession with anti-immigration towards Latinx communities, the historical oppression of Native Americans, the recent Anti Asian hate violence, the anti LGBTQ+ hatred…..the list feels never ending and heart breaking.  I hesitated to write about this as a white man. I’m aware that I do not know nor will I ever know what it’s like to have to remove my air fresheners and double check my registration before I drive as Daunte Wright did before he was murdered. Or to worry about my own life let alone appearance while I go for a jog like Ahmaud Arbery.  And the countless other things I do not have to think about or fear as a white man. I continue to learn about what that means for me, how I can do more in my own thinking and actions as well as in my circles of experience.  I stand firmly against racism In all it’s horrific ways, but In this particular forum, It Is represented in the songs on these mixes in this fight for an equal, equitable, accountable and just society.

In the midst of a global pandemic which already had me and the world down, all of this feels so humbling.  I am ultimately just a man. This experience with my injury and this mix embody those emotions.  My own old nemesis of addiction reared it’s ugly head for a a few rounds through this and I’m grateful it did not Mike Tyson me.  I am walking away from that bout with my recovery intact.  Yet, without the love and support of my people, all my people, and that includes my people making music, my wife making countless meals and doing countless dishes, my kids getting my crutches or sneakers from my clsoet, my family sending me cards, my friends bringing me recovery support when I detox from pain meds, my guys on the Hip Hop Gratitude text list or my ladies on the Sober Getting Better group chat…….I am broken and left trying to put my socks on with a tube that has a string attached alone wondering how I’m gonna get off the morphine.

Another special shout to Coco who did the artwork for this.  And my wife Mel who took the above photo.  See her alternate version at the bottom of the post which displays her most recent tattoo of a heart and a P for which I can only say my love and gratitude are eternal, you already know you are in these mixes “as you wish”.  The intro’s and outro’s I chose to speak specifically to the topics of therapy, injury and trauma as well as the reframing of loss and the final recovery that brings hope to a renewed future where I stay the hell off of skateboards and morphine, stick to golf and using TUB Mixes for therapy. Peace, love, thanks and blessings. 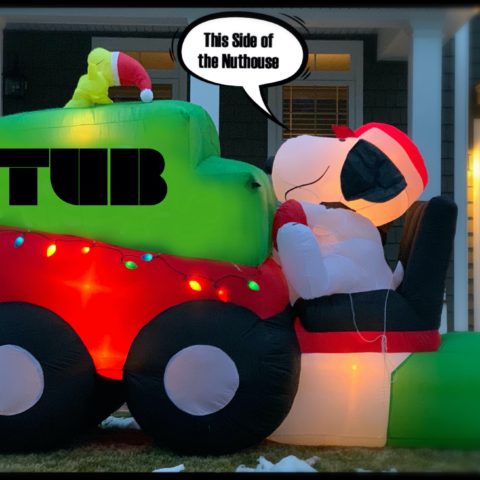 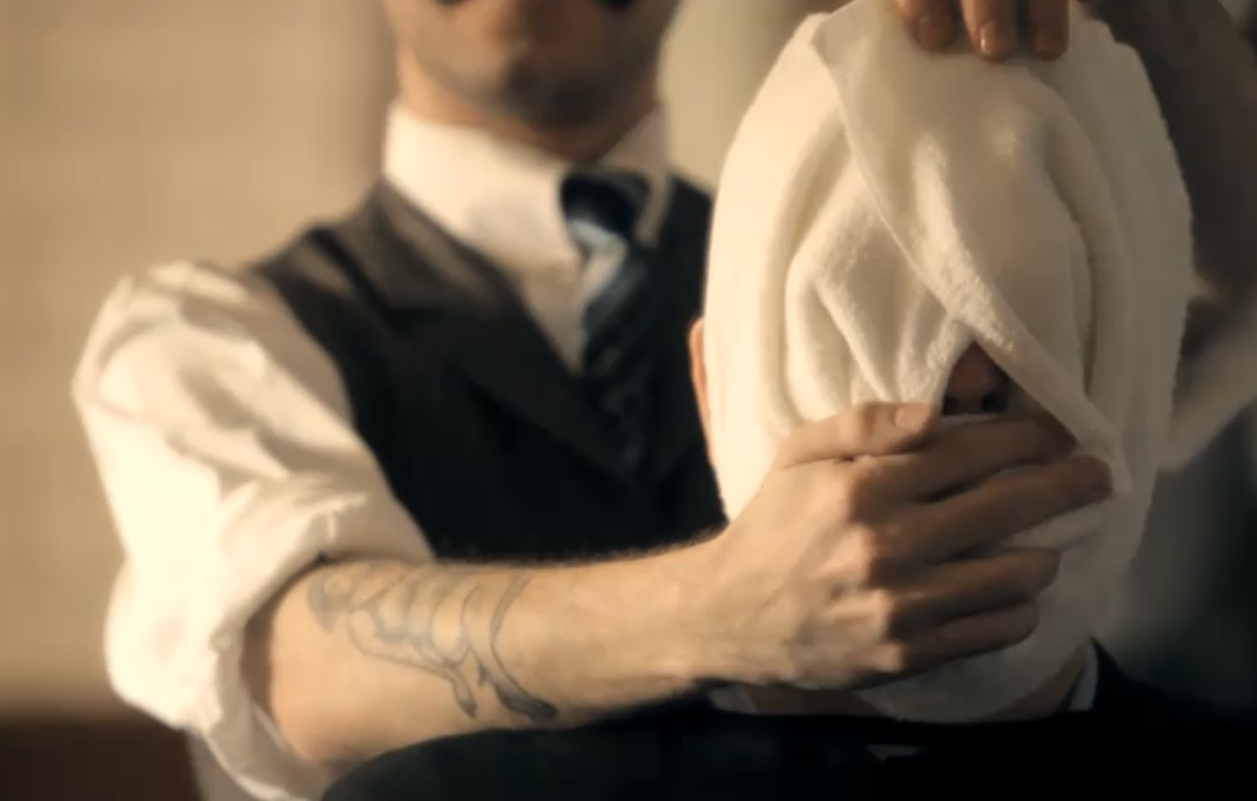 An inspiration in a sea of sameness… 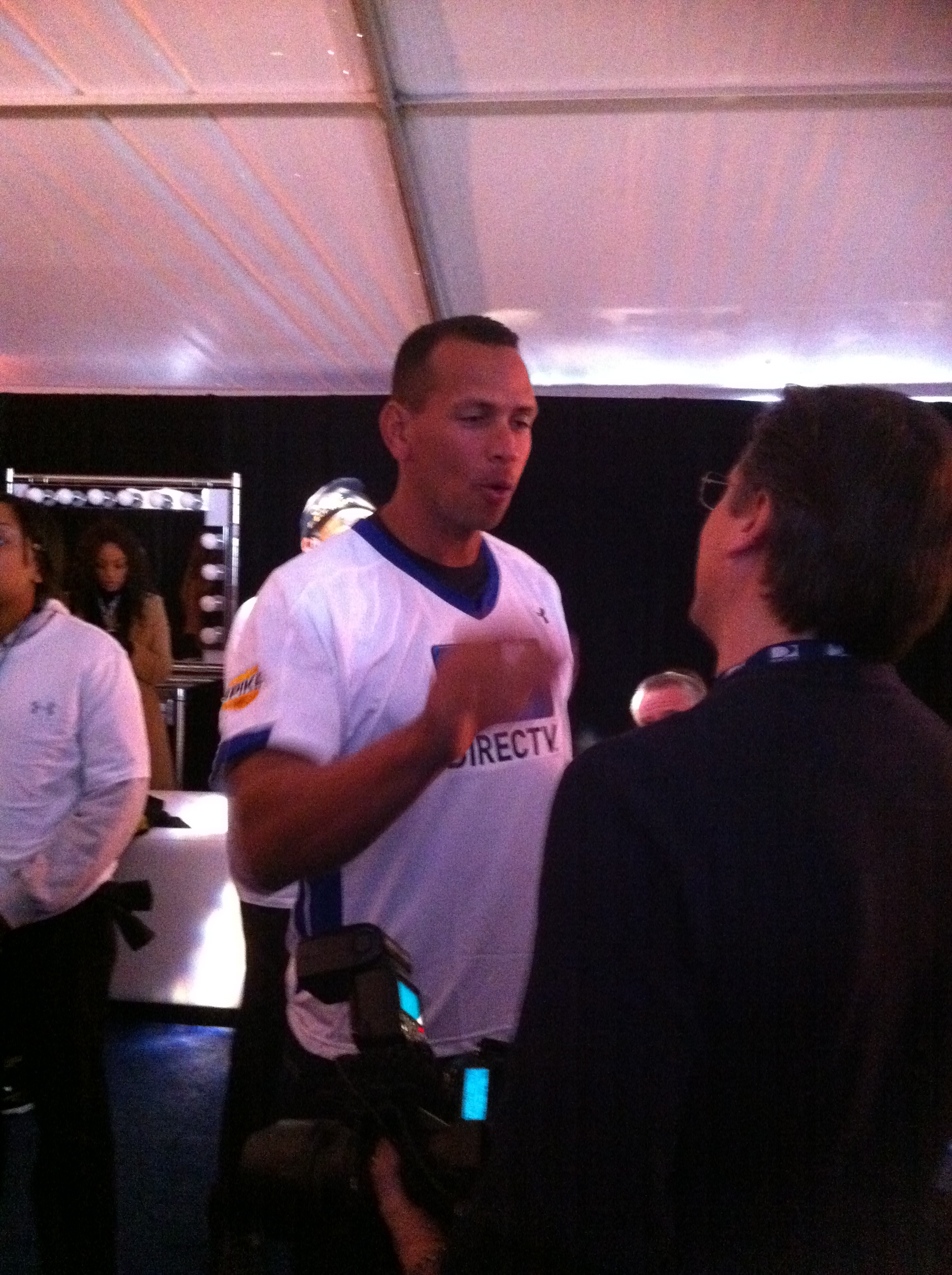 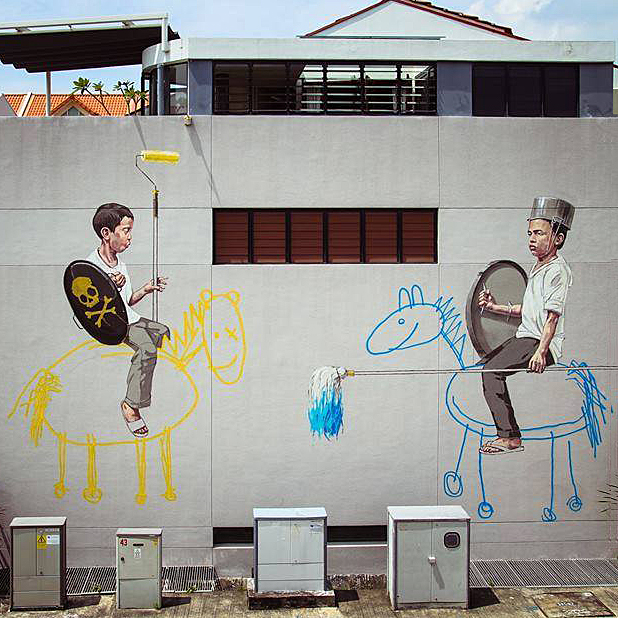 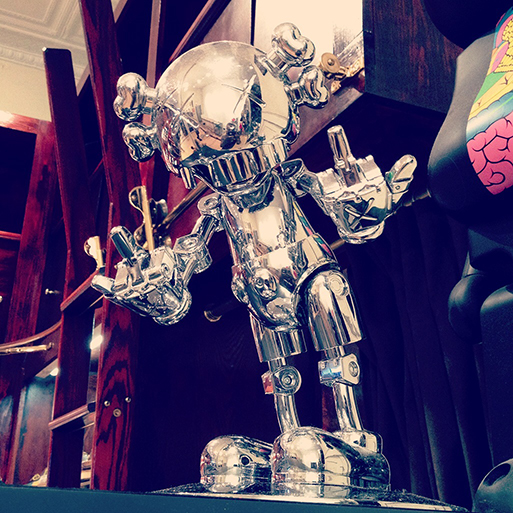